BOOK & AUDIOBOOK REVIEW: Captivated By You (Crossfire #4) by Sylvia Day

Leave a comment Posted by Collector of Book Boyfriends on November 24, 2014 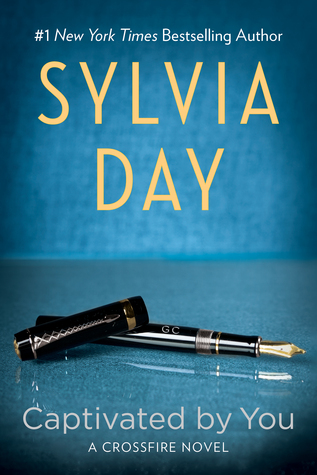 Gideon calls me his angel, but he’s the miracle in my life. My gorgeous, wounded warrior, so determined to slay my demons while refusing to face his own.

The vows we’d exchanged should have bound us tighter than blood and flesh. Instead they opened old wounds, exposed pain and insecurities, and lured bitter enemies out of the shadows. I felt him slipping from my grasp, my greatest fears becoming my reality, my love tested in ways I wasn’t sure I was strong enough to bear.

At the brightest time in our lives, the darkness of his past encroached and threatened everything we’d worked so hard for. We faced a terrible choice: the familiar safety of the lives we’d had before each other or the fight for a future that suddenly seemed an impossible and hopeless dream…

After a long wait, Eva and Gideon are back! *happy dance* And the wait was worth it. This book is amazing. the drama of the series continues, the romance, the chemistry, the secrets, the unhealthy relationship, the sex, Oh. My. God. the sex *fan self*, everything continues and it couldn’t be better!

Gideon and Eva are now in a more mature relationship, even though they still fix everything with sex, well, most Gideon than Eva, but now I understand why he acts this way. Despite all the secrets that Gideon is still keeping from Eva, I LOVE how their relationship has grown, how much they love each other, but most of all, how much Gideon loves Eva. It’s been four books already, and everything that they have been through and how much they have given up and sacrifice for each other, still doesn’t seem to be enough for them to be completely fine as a couple and the troubles keeps going on between them.

They have some issues during the book, minor ones, easy to solve. But the big one was bad, way too bad, I was hurting with them both, especially with Gideon, my poor baby, I wanted to hold and comfort him. I understand Eva’s anger at him, she needs her independence, and this “thing” unleashes more and more issues between them, so it makes their problems bigger and bigger, but again, the sacrifices and the truth brings with them some relief for Gideon and Eva. It was so hard to read, they were hurting so bad and my heart was aching for them.

This book made me love Gideon even more than I already loved him. He is so broken and needs helps so badly, and Eva is the only one capable to give him the help he needs. His love for Eva is bigger than the one she has for him, and she loves him without limits, so that is a lot to say. He is also a very hard person, when he doesn’t want to open, he won’t open to anyone, and he can hurt people without even thinking about it. It is in his nature, after so many years of being so cold and heartless, he just acts like that. He even acts like that with Eva, and he loves her so damn much. But Eva reached to him, she touched his heart, his soul. I love how much he has move forward in this book, and only because of her. Sadly, they had to go through a rough path so he could see what their relationship and Eva need, so he could take big steps in his therapy, but it helped. Sometimes this bad moments are necessary in their kind of relationship.

There are great times in this book with the secondary characters. I love how much Gideon’s relationship with Ireland has gotten stronger. I loved the time Eva and Gideon spent with their closest friends. It was good to see Eva and Magdalena in good terms now. Cary on the other hand, isn’t taking good his parenthood, his relationship with both of his lovers isn’t in the best moment and he and Eva fought half of the book. I really hope everything gets better for him next book. He is my favorite character, after Gideon and Eva, so, it’ll break my heart if he doesn’t have his HEA!

Captivated By You kept me captivated for two and a half days, and not only because it had been a lot of time after the third book of the series, but also because of one HUGE surprise this book has, and I enjoyed it so much. I can’t wait for the last book of the series.

When I saw the cover of the audiobook I was in shock! And excited! And very very happy about it! And when I got to the third chapter I was jumping up and down! But I want you all to find out by yourselves, so I won’t say much about the audiobook, except that it was SO FREAKING HOT!!! Worth every penny!! 100% recommended!! 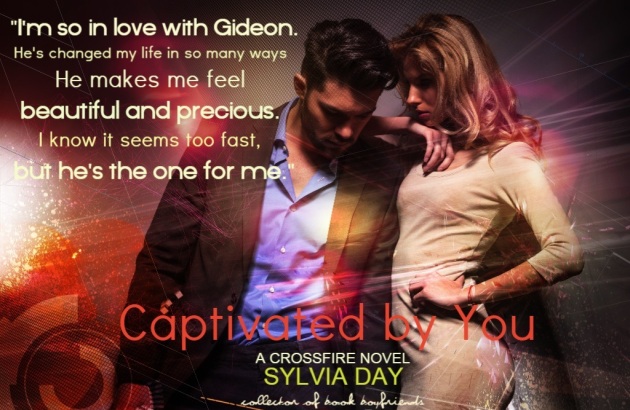 Sylvia Day (aka S. J. Day and Livia Dare) is the #1 New York Times and #1 international bestselling author of over 20 award-winning novels sold in more than 40 countries. She is a #1 bestselling author in 21 countries, with tens of millions of copies of her books in print. Her Crossfire series has been optioned for television by Lionsgate, and she has been nominated for the Goodreads Choice Award for Best Author.